I’m not really one of those “let life happen” people. I currently have my bill payment dates set through March. I make dinner menus two weeks in advance. I begin mentally planning the appetizers for my Christmas party in August. The most wild behavior I ever exhibit is when I put anything full-price in my cart at Target.

And then I met Sandy.

I strolled into Petco on that fateful Sunday afternoon full of holiday cheer, jalapeno turkey burger and garlic rosemary fries. Everyone had enjoyed our yearly pilgrimage to the Christmas Ice Caverns to see little animatronic elves dancing around with polar bears. Both kids had been not only well-behaved but, dare I say, downright delightful at the restaurant (when you have small children, Smashburger counts as a restaurant). Thanksgiving was just a few days away. Life was good.

But my heart still hurt.

Exactly three weeks prior, I had failed tremendously. I had given back a rescue.

I promise I had done all of my homework. Lined up my ducks so very neatly. Spent weeks before we met him having conversations with Ricky’s owner to help ease the transition for both him and our little old man, Rocco.

And yet, over the month that Ricky lived with us, his odd behavior worsened with each passing day.  Lengthy conversations with three different trainers produced mixed results. And then, early one Friday evening, the dog that I had agreed to take in; the dog that we had prepared so meticulously for; the dog that was coming into my home to help ease some of my son’s worsening anxieties…bared his teeth and lunged at Vince’s unsuspecting and stunned face.

Luckily, there was no physical damage. It had been a “warning,” for what we’ll never know. Apparently watching Vince put on a sock was a trigger of some sort for this poor soul. An evaluation revealed that the dog whose previous owner assured me was 6 years old, gentle, and an absolutely perfect addition to a family with a jittery little boy, turned out to be 9 years old, consumed by a canine equivalent of PTSD, and had no place being anywhere near a child.

So, needless to say, my heart dropped into my stomach when my eyes caught a local animal rescue’s banner hanging at the entrance of the pet store.

“I’ll just grab some Christmas tree cookies for Rocco and be on my way. These rescues only ever bring cats to their adoption events anyway,” I told myself, just before a little black puddle of fluff came out from behind a display and collapsed in a pile of wiggles at my feet.

And that’s how I met Sandy.

Are you imagining all of this? Do you see what I was up against?

I still said no.

I explained to the rescue that we had  waited years to adopt another dog, and we had been rejected by 5 rescues because of our older dog, Rocco, and our private adoption imploded, and we had done our research and we can’t have a puppy because we work too far away to take it out every 2 hours, and a black lab/hound mix would be far too energetic for our dachshund, and, and…I concluded my rambling monologue by sincerely wishing them the best in finding wonderful homes for both Sandy and her 10 brothers and sisters- but we definitely could not be one of them.

An hour later, my husband handed me a glass of wine and said, “Fill out the application.”

I did, partly because it was white wine and white wine goes straight to my head. Then I let it go. This would be rejection #6 and then we could move on with our lives.

She has peed on every hardwood and carpeted surface in my house. She licks the toilet tank and runs around with the bowl brush in her teeth. She tries to hurl herself into the bathtub with the kids. She puts her head on my lap when I’m trying to pee.

She has learned to clear a gate like a championship show horse. She bit off the corner of one of my kitchen tiles. She’s under the impression that our water dispenser is, in fact, her water bowl. She thinks the mat in front of my sink is a claw sharpener.

She gleefully pounces all over the vicinity of my 127 year-old dachshund.

She has so little control over her limbs that in the past two days alone she has crash-landed into my china cabinet, knocked over my mail table (it was literally raining bills in my living room- my worst nightmare), and slammed into a door so forcefully that I was afraid her head was going to go through it and get stuck in my linen closet.

She thinks the 5ft lighted snowman on my front lawn is someone to play with and engage in conversation.

She requires constant supervision, and is no longer allowed in either of my kids’ rooms after the crayon-eating incident, and what she did to that poor stuffed pink bunny (we do not discuss it).

And yet…I knew the moment she waltzed into my driveway that we couldn’t live without her.

She would permanently attach herself to Pat if she could. She noses her way into Grace’s room each morning to lick her face through the crib bars. She flings herself to the ground so Vince can gently scratch her belly while he watches television; she sits next to him so he can scratch her head while he does homework. She brings her blanket and sprawls at my feet when I’m on the couch, and naps behind me while I’m cooking.

She even tries to pre-clean all the dishes for us when we’re filling the dishwasher!

So Marty was unplanned. The ducks were not in a row this time- they were drunkenly swinging from the ceiling. But in the two weeks that she’s been destroying- I mean living in- our house, she’s managed to calm my son’s fears, give my hopelessly stern husband a reason to smile, and- added bonus!- heal that tiny gap in my heart that I thought only Baby #3 could fill (“All part of my plan,” said Pat with an evil grin).

So I guess there’s something to be said for flying by the seat of your pants every now and then.

Welcome to the family, Marty Maraschino. 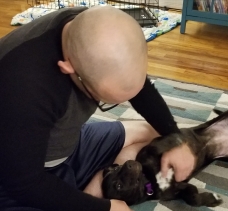