We had our annual ChristmaHanukkah party this past Saturday (someone said a word, it stuck, now that’s its official title…)

I have this “thing” about getting people together and feeding them- my grandmother instilled it in me. So every year I get all choked up as I look around and see everyone filling their plates, telling stories, mixing cocktails…it makes me happy.  Depending on how strong the cocktails are (I’m looking at you, Jon), it makes me happy and slightly sleepy.

But this year isn’t just any year- this is THE year. I knew I was going to be struggling to keep myself together (you read that right- I’m such an emotional person that I actually ANTICIPATE my level of emotion at future times…I’m a big ball of fun, people). This is the year Pat and I have dreamt about since we signed the lease on our basement apartment- that beautifully damp, moldy gem of a dwelling. This is our first Christmas in our own house!

Buying a home is an expected, natural step for many people- we’re not those people. We lived in 6 apartments before we excitedly signed the next 30 years of our paychecks away, giddily slid the key into the lock and bounced into our dream home (a cape cod with plumbing from 1952 and a hallway ceiling light so high and awkward that it can’t ever be changed without risking “certain death,” according to the previous owner- but it’s all ours!!!). So on Saturday, as I straightened the boughs in the doorways and fluffed the homemade snow in my Christmas village (oh yes, I am THAT person), I prepared to completely lose my cool before the appetizers were even ½ eaten.

But I didn’t lose it.

As the last few guests hugged us and headed home, I realized I hadn’t made my usual “thank you all for coming/we love you guys so much” speech. I hadn’t gotten choked up watching my friends share stories, parenting tips and laughs at my dining room table. I hadn’t even sighed like a Little House on the Prairie character as everyone gathered around the tree to open their gifts. Why hadn’t the magnitude of this year turned me into a weepy mess? Was my “over-react” button malfunctioning??

Then I realized something.

This was our first year in our home… but not really.

Our friends have been there when we lived in a smelly basement and we could only afford a $5-$10 grab bag gift.

They’ve been there for everything from turkey dinners to pumpkin lasagna to burrito pies to Thai curry to taco bars to sandwich platters.

They’ve been there when we were so broke that we had to ask everyone to bring food with them.

They helped me take everything out of the oven when I was newly pregnant and too sick to look at the food I had just cooked. They stayed late to help us clean up when I realized that being newly pregnant made me pretty damn tired.

They showed up with more love than I ever thought any one person could handle when I had to face my first Christmas without my grandmother.

They’ve shown up for birthday parties in the backyard where the bees we didn’t know were residing in the siding of Rental #5, decided to join us in the tents.

They showed up to and never complained about last year’s party in Rental #6, where they had to run up and down the stairs because our dining room was on the first floor and our living room was in the basement.

They’ve shown up to and played along with every surprise birthday party I’ve ever planned for my husband, even though it’s ridiculous of me to plan a surprise party every year as though he doesn’t remember he has a birthday, or that his wife has the mentality of an 11 year-old and needs to make a big deal out of everything.

They’ve shown up with appetizers, desserts, wine, champagne, beer, bourbon, hostess gifts, and presents for our children, and the most sincere hugs and smiles I’ve ever gotten from anyone.

So many of them have shown up at the hospital with food and presents after each baby was born, that I got scolded by a nurse (she was a charmer, that one).

They’ve come back to the hospital and endured having cafeteria macaroni and cheese hurled at their faces by an agitated, feverish toddler so that I could take a shower.

They- these friends that long ago became our family- they have made every place- the basement, the 2-floor apartment, the bee house from 1876- into a home.

So, since I forgot the speech that you all so patiently sit through every single year:

Thank you for always turning our house into a home.

(…you thought you escaped the speech this year- HA!) 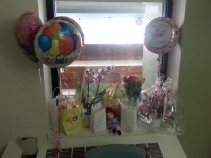 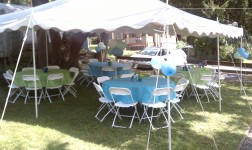 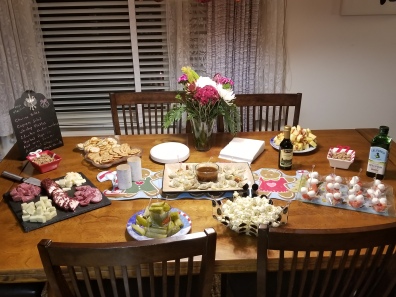