“I don’t know if I can have children.”

Sure, it sounds like a funny thing for a 17 year-old boy to bring up during a date…but we both had a feeling that this was “it” very early in our relationship, and he was well-aware of my “I want so many children we may have to live in a shoe” dreams.

After the shock wore off, I assured him that whatever medical thing was going on, we could deal with it when it was time, or we could adopt, or we could hire a surrogate, or we could finish our dinner at TGI Fridays and talk about it in ten years…

“No, I just don’t….I don’t know if I’m really cut out to be anyone’s dad. I don’t think I would be a very good father. I don’t…think it’s a good idea. I just needed you to know that, so there aren’t any surprises later, and you can end this and find someone who can give you what you need.”

The heaviness of his gaze met mine and the lightbulb finally flashed in my mind. Of course he didn’t think he could be anyone’s father. His childhood had been full of more pain and hardship than even an adult should have to endure. The only example of fatherhood presented to him was something out of a worst-case scenario manual.

And they all come back to me, loud and clear, on nights like last night.

It was some ungodly hour and we were in Round 3 of the dreaded night terrors. Screaming, wide eyes, hyperventilating- if you’ve never experienced them, I highly recommend it. They’re a hoot.

My singing, cradling, cooing, and kissing were met with nothing but louder screams- until Daddy walked in. I stood by helplessly as Grace reached out and curled herself around his chest.  I saw her little fingers press into his arms and her head drop peacefully onto his shoulder. I watched her take a deep breath, wiggle her toes, and settle into a completely peaceful state as Pat wrapped his arms around her, began to sway, and whispered “You’re ok, my Gracie. You’re ok, Gracie girl. I’m here. It’s ok.”

And a memory popped into my tired, frazzled head: “I don’t think I would be a very good father.”

I left him to do his magic and wandered groggily back to our bedroom, where our 13-year old dachshund, Rocco, was expecting a damn good reason for his 3rd unwanted wake-up call.

Looking at his old, gray face, I thought about a night many years ago- long before we knew what a night terror was- when it was a ruthless stomach bug keeping us up.

I remembered stumbling from the bathroom to the bedroom for the 913th time and finding a sight so strange that I thought I was hallucinating. There was my husband, lying on a sheet on the floor, with our new puppy cradled in his arms.

Pat had looked at me and whispered- so as not to wake the dog- “He threw up on all of his beds and a bunch of sheets, and he was scared and cold, so I’m sleeping on the floor with him so he feels safe.”

Long after Pat got back into bed last night, Rocco had settled back into sleep, and they were both snoring gently, I stared at the ceiling and let more memories swirl through my head.

The morning that Vince was too afraid to walk into his school because there were too many “big” kids, so Pat sat on the curb with him for 10 minutes, discussing his feelings and his fears and giving him the courage to walk through the door.

The night Marty came home from her spay surgery, sedated and aching, and Pat put her head on his lap, fed her one piece of food at a time and rubbed her back.

The day Rocco went into acute liver failure and Pat climbed down from the bridge he was inspecting, drove an hour to the emergency vet, cradled our almost-lifeless, drooling, bleeding puppy in his arms and assured him that “It’s going to be ok, Buddy, you’re going to make it,” handed him to the vet staff…and walked to the car and sobbed.

The night Vince was admitted to the hospital with an unrelenting 106-degree fever and Pat climbed into the hospital bed with him and played the same episode of Mickey Mouse on his phone until the battery died.

The weekend we drove to Brooklyn to visit Pat while he was away for work, and he found someone to cover his night shift so he could fall asleep with his son, his wife and her growing baby bump in his arms.

You know what? You’re right, Pat. You were right all those years ago and you’re still right today. Your patience runs out too quickly sometimes. You have so many rules. You expect a lot. You don’t always know what to say to calm them down. Your dry sense of humor is often lost on them.

You aren’t a very good father. You weren’t cut out for this.

You were MADE for this.

Learning from the best is natural. Figuring it out on your own despite being stuck with arguably the worst of situations? That’s damn near miraculous.

Naturally, all this deep reflection caused me to sleep through my alarm and rush around like a maniac this morning. But in the middle of my frantic apple-washing and sippy-cup filling, I caught a glimpse of Vince zipping up Grace’s favorite “kitty-cat” boots and reminding her, “Keep your mouth open so I can brush your back teeth too, Gracie Girl.” I stood still, forgot about my sleep deprivation, and smiled. Because a thought had just popped into my head.

Our son? Someday, he’s going to be a great father.

He’s learning from the best. 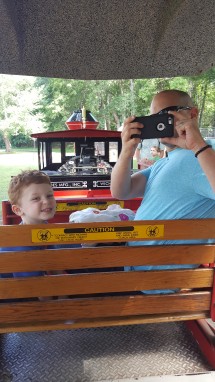 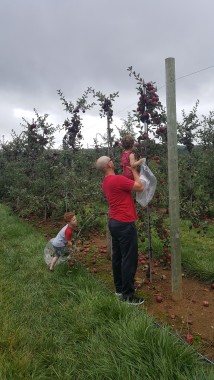